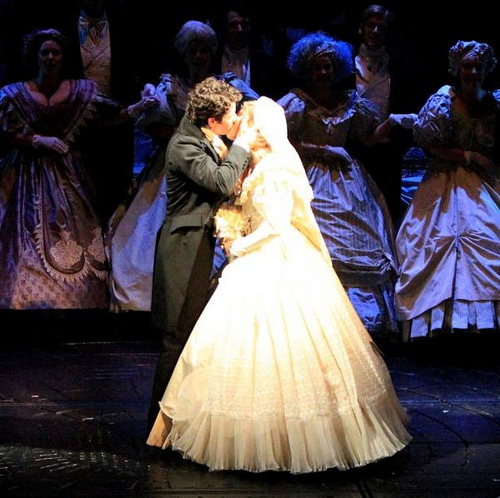 Broadway is a part of UK history. Everybody we know will have watched one show or another. And some plays feature real-life proposals and weddings ! It is a very nice idea for an actor to propose to his loved one on a Broadway stage.

And for an Actor who did actually do this proposal, it was such a delight for it to be a successful one.

An actor finishes his matinee performance with his girlfriend in the audience watching on by, thinking that he is taking all the limelight. How wrong she is, as he tells the audience how much the last year had meant to him and how much he loves her….and then on bended knee pops the question !

Having an entire Theatre applauding you on your Engagement is certainly one way to get you to say yes but I think she would have anyway!

One reply on “Wedding Proposal: A Surprise Broadway Performance”

That was such a good way to propose for a lady, that was awesome and I love it.

This website uses cookies to improve your experience while you navigate through the website. Out of these, the cookies that are categorized as necessary are stored on your browser as they are essential for the working of basic functionalities of the website. We also use third-party cookies that help us analyze and understand how you use this website. These cookies will be stored in your browser only with your consent. You also have the option to opt-out of these cookies. But opting out of some of these cookies may affect your browsing experience.
Necessary Always Enabled

Any cookies that may not be particularly necessary for the website to function and is used specifically to collect user personal data via analytics, ads, other embedded contents are termed as non-necessary cookies. It is mandatory to procure user consent prior to running these cookies on your website.